Tude MacLoud (튜드 맥클라우드 Tyudeu Maegkeullaudeu,チュード・ラオドウ Chūdo Raodou), previously romanized as MacLeod, is a wanderer and one of the playable characters in Rusty Hearts. In place of his left hand, he wields the Gauntlet, Claw, or Demon Hands depending on his weapon focus. Gorgon is his skill master.

He is voiced by Kazuya Nakai in the Japanese version of the game and Lim Ha-jin in the Korean version.

Meilin Chen is his avatar.

Tude has blue eyes and shoulder-length blonde hair pulled back with a red headband. His chin is marked with stubble. All of his clothes in his default outfit are noticeably frayed. He wears a long black jacket with red and white trim with both sleeves torn above the elbow over a grey shirt that is ripped to expose much of his chest; this is tucked into his beige pants along with what could be fabric armor, something akin to an apron, or even a kilt. He accessorizes with a tooth necklace and wraps around both arms. The ensemble is completed with open-toed sandals. His left arm is either covered by a bulky gauntlet or allowed to fully transform into a large bestial claw.

A lifelong wanderer, Tude Macloud was attacked by a wolf in his travels. He managed to fend the beast off but not after it broke off one of its huge teeth inside his chest.

Before long, Tude discovered that the wolf's bite and its tooth were having an effect on his body. His arm turned into a wicked claw that he keeps hidden within a bulky gauntlet. He was traveling from town to town to avoid arousing suspicion when he stumbled into Bramunez on a whim. In a serious case of wrong place at the wrong time, Tude was sealed within Curtis Castle when the Golden Seal team erected the barriers to trap Vlad inside.

He joins up with Frantz and Angela once they enter the main levels of Curtis Castle (although you may play as Tude from the beginning of the adventure).

Korean and Japanese sources offer more in-depth character bios; Tude's age is given as 29 and his backstory is rather different. As a child, he was abandoned in the forest only to be raised by the wolf "Kashal" (カシャル) who became like a father to him. When Tude was 18, Kashal was dying and entrusted his fang to Tude, which is the source of Tude's lycanthropy. He has wandered ever since looking for Kashal's tribe, which takes him to Bramunez where he gets into trouble; the Golden Seal Team intervenes in exchange for him helping them.

Tude's portrait has changed from closed to open beta.

Tude with the Gauntlet

Tude with the Claw

Tude with the Demon Hands 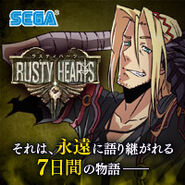 Official Japanese banner
Add a photo to this gallery

Retrieved from "https://rustyhearts.fandom.com/wiki/Tude_MacLoud?oldid=18461"
Community content is available under CC-BY-SA unless otherwise noted.