At level 20 Natasha can choose to specialize in Revolver, Musket or Weapon Bag focus.

She’s not blowing smoke when she unholsters her revolvers. Natasha’s gun skills are second to none and her fastest attack is with dual revolvers. Close range combat is not Natasha’s strong suit, but in sticky situations she’ll make it rain bullets of death on anyone that stands in the way of avenging her sister’s death. While these pea shooters may pierce even the toughest monsters, they are not recommended unless you’re ready to get up close and personal. The two revolvers are also fairly accurate, and can come in many different styles and variations.

This isn't your traditional musket; you won't find Natasha manually loading bullets and powder. This rifled musket is ideal for expelling enemies from even the longest range. Increased range doesn't come without sacrifice; accuracy is given at the expense of speed, but the increased damage and range more than make up for it. A skilled marksman - markswoman, knows the right weapon for the job and Natasha is prepared for anything. When using a musket, Natasha wields one gun rather than two, with a slower but more powerful shot. She also throws grenades which have a small AoE attack. 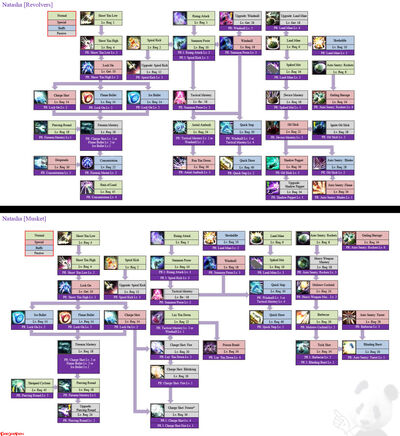 1 of 4
Add photo
Retrieved from "https://rustyhearts.fandom.com/wiki/Skills_(Natasha)?oldid=17696"
Community content is available under CC-BY-SA unless otherwise noted.