At level 20, Frantz, Roselle, and Leila can choose to specialize into the Sword, Axe, or Twin Swords focus.

In this day and age, every young gentleman is expected to know something of swordplay. In Frantz's hands, however, the classic weapon becomes a deadly blur of razor-sharp steel. Lacking in range, using this weapon requires Frantz to be quick on his feet. In battle, he supplements his swordsmanship with dark magic granted by his vampiric blood.

While skilled in axe weaponry, swordplay is where Roselle stands out. Years of practice and duels have prepared Roselle for any sword battle. With pinpoint lunging attacks distant enemies don’t have a chance against her. Roselle’s sword carries the perfect balance of speed and damage and is effective in almost any situation.

Leila has honed her skills and masteries in the art of sword play. This young lady is no stranger to weapons of destruction and magic. Leila is young and naïve in many ways, but as an avid swordswoman she knows her weaponry. Just like her sister, Roselle, she wields a blade with extreme precision and strength. Instead of brute force, she focuses on agility and acrobatics to destroy her enemies.

When fighting an uncivilized enemy, sometimes a civilized weapon just won't get the job done. For this reason, Frantz has trained with massive axes that split his monstrous opponents in two with single strokes. Though not as fast as his sword, Frantz's axe makes up for the difference with the raw power and range of his attacks. He also employs some rather unorthodox techniques in which he throws the colossal weapon toward his foes like other men would throw darts.

Very few would suspect a slender alleged “vampiress” would brandish a massive axe, but Roselle has proven to be quite proficient. Her speed and agility with this brutish weapon are unsurpassed by her foes. Roselle’s spinning attacks make crowd control a cinch and perfect in tight situations.

In addition to being an elite swordswoman, Leila also doubles her veracity as a master axe wielder. This tenacious and gravity defying act requires unrivaled experience and flexibility. Leila mastered the Axe wielding at an early age, but her skills have recently peaked as she has finally old enough to handle full sized weaponry. It doesn’t matter the axe type, she deals deathly blows with them all. As a young lady, Leila found ways to overcome her size deficiency through speed, agility and aerial attacks. What would normally prove to be an impossible strike is mitigated by her leap and flip attacks. 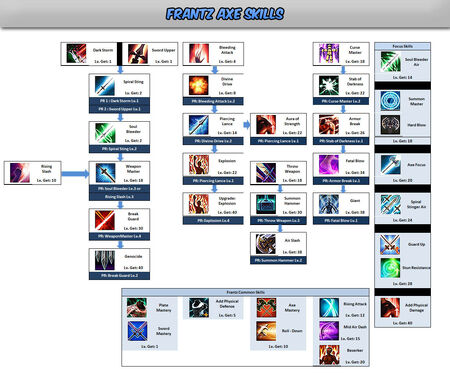 Retrieved from "https://rustyhearts.fandom.com/wiki/Skills_(Frantz)?oldid=18488"
Community content is available under CC-BY-SA unless otherwise noted.