At level 20 Angela can choose to specialize in Magic Sword, Scythe or Glaive focus.

This wicked looking blade is Graestra's original form, though it shifts and grows as Angela becomes more skilled with it. The Magic Sword form is hard hitting but slow and has a short range. Its real power is its effect on Angela's own magic. She can summon fire and orbs of arcane energy to blast all who stand in her way. As Angela grows in power, she can master all the elements, heal her allies and even learn some abilities Vlad's own minions use against her.

Some like it fast and that’s what Edgar brings. Mix Edgar’s nasty speed with a lighter more efficient weapon and you get remarkable results. The Magic Sword has proven to be a popular choice for Angela and Edgar also manages to possess impressive skills with this piercing blade. Edgar’s wisdom and age prove pivotal in controlling a razor-sharp and deadly weapon like the Magic Sword. Combing witchery with sword skill is no easy task, but this grown man trapped in an adolescent boy’s body makes it work.

(Gives healing spells and focuses on support. Generally considered to be better for PvP than scythe focus.)

It has been a long time since Graestra tasted blood and thought of doing battle with the countless minions of Vlad within the halls of Curtis Castle has the spirit bound within the blade absolutely giddy. If Angela will allow it, the spirit's bloodlust will manifest in the weapon of death itself, a large and wicked scythe. Slower even than the Magic Sword form, Graestra's scythe form trades magical superiority for long range, brutal attacks. The weapon seems to have a will of its own as it leaps from Angela's hand to seek out new prey. This weapon form makes Angela's spells more violent, but less precise, and has fewer support or healing abilities.

As a young agile child Edgar is undeterred by the slow and heavy Scythe. His magic abilities and high proficiency make brandishing this brute weapon effortless. With speed that trumps Angela and the ability to leap large distances he proves that he is just as capable as the older Scythe master. Despite being slower than the Magic Sword, this weapon of death is more powerful and can attack larger groups of enemies at any given time. Equip Edgar’s Magic Scythe for crowd control and attack power.

(Gives a bonus to magic damage and more AoE spells.) 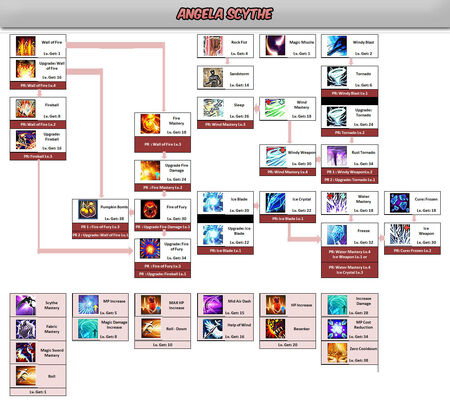 Retrieved from "https://rustyhearts.fandom.com/wiki/Skills_(Angela)?oldid=18490"
Community content is available under CC-BY-SA unless otherwise noted.