She is voiced by Chiaki Takahashi in the Japanese version of the game.

Roselle was released alongside the "Requiem" update and is the 6th character introduced to the game. She is an Avatar for Frantz, so she utilizes the same weapons and skills as him. She has yet to appear in the story, but can be played from the beginning of the game.

Roselle has red eyes and long platinum-blonde hair. In her in-game default outfit, she wears a black, sleeveless cropped jacket with long belt-like extensions down the back over a chin-high top composed partially of transparent material tied off with a buckle choker necklace. On both arms she wears long detached sleeves with puffed ends and black gloves. She wears very short frayed shorts and ripped leggings under her asymmetrical buckle-up boots; one falls just under her knee while the other reaches past mid-thigh. She accessorizes with various chains and a golden necklace with a red gem embedded in it.

Roselle arrived in Bramunez alongside her sister Leila Vergerius. She is quiet, but very protective of her younger sister. She has a vicious fighting style that she's not afraid to use to defend her sibling. The sisters shun the daylight and are thought to possess Vampiric blood, but the source of this is a secret known only to them.

Korean and Japanese sources offer more in-depth character bios: in Roselle's, her age is given as 20 and it recounts that she acquired vampiric blood after an "incident." She seems to have encountered Angela's master, Rebecca, who had a hand in helping her to control her vampiric powers. Her appearance in Bramunez and subsequent clashing with Vlad is "almost as if by destiny." 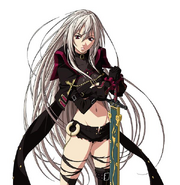 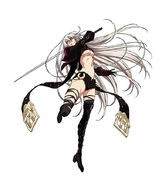 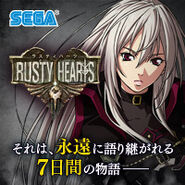 Roselle with the YonYon pet
Add a photo to this gallery

Retrieved from "https://rustyhearts.fandom.com/wiki/Roselle_Vergerius?oldid=18387"
Community content is available under CC-BY-SA unless otherwise noted.