Natasha Borzenkova (나타샤 바르젠코바 Natasya Bareujenkoba, ナターシャ・ボルカ Natāsha Boruka) nicknamed "Trouble Shooter," is a con-artist and one of the playable characters in Rusty Hearts. She is a gunner who makes use of traps and landmines and can either dual-wield two Revolvers, use a single Musket, or acquire a Weapon Bag depending on her weapon focus. Unoa is her skill master and younger sister.

Korean and Japanese sources offer more in-depth character bios; Natasha's age is given as 25 and her father is a world-renowned treasure hunter who - like Natasha - is searching for her younger brother whose fate is not as certain as in the English biographies; it seems he was taken away by someone and that search brought Natasha to Bramunez. She can wield magic bullets after making a contract with a witch; one of her eyes is the source and cost of this power (her left, according to sources that specify.) 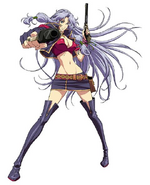 Retrieved from "https://rustyhearts.fandom.com/wiki/Natasha_Borzenkova?oldid=18467"
Community content is available under CC-BY-SA unless otherwise noted.