Meilin Chen (메이린 첸 Meilin Chen, メイリン・チェン Meirin Chen) "The Flawless Boxing Girl" (「天衣無縫の拳術娘」Ten'imuho no ken-jutsu musume) is a martial artist and one of the playable characters in Rusty Hearts. In place of her left hand she wields the Gauntlet, Claw, or Demon Hands depending on her weapon focus. Gorgon is her skill master.

She is voiced by Asami Shimoda in the Japanese version of the game.

Meilin is the fifth character introduced to the game and is an Avatar for Tude; she is described by [Create Avatar: Meilin Chen] as "a Chinese martial artist who uses the same weapons and skills as Tude". She has yet to appear in the story, but can be played from the beginning of the game.

"And just to alleviate any fears with this topic coming back, Chen is an avatar for Tude, nothing more, nothing less. It's a way to play as Tude, but female."
— forum mod

Meilin has sky blue eyes and black hair which she wears pulled up into symmetrical loops. In her default outfit, she wears an sleevless, ankle-length dress with floral patterning along the end similar in style to a cheongsam that is tied at the throat. Over this she wears a blue short-sleeve jacket with gold accents and a star cut-out with a tassel on the back end. Her shoes are the same shade of blue and she accessories with a fingerless glove on her right arm and small white flowers in her hair. Her left arm is either covered by a bulky gauntlet or allowed to fully transform into a large bestial claw.

No one knows exactly what brought this mysterious young lady all the way to Bramunez, nor do they dare ask her about the power that resides in her left arm. She's shy around the townsfolk but once she gets into Curtis Castle her fists and feet speak volumes. Her lightning fast techniques and the power of her mystic arm will ensure that Vlad's minions learn to fear the name Meilin.

Korean and Japanese sources offer more in-depth character bios. Meilin's age is given as 18 and her backstory is visited with some more detail. It recounts that she is the sole survivor of her clan after a dispute between brothers. She attempts to use the power of her "family's curse," but her haste causes it to manifest incorrectly, and she experiences great pain in her left arm. 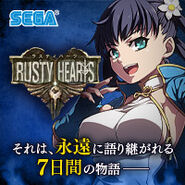 Retrieved from "https://rustyhearts.fandom.com/wiki/Meilin_Chen?oldid=18411"
Community content is available under CC-BY-SA unless otherwise noted.