Margoras, also known as Death (デス), is described as the immortal demon gatekeeper of the Other World. He appears to be working with (or at least adjacent to) Vlad and Mr. Heo, though the nature of this collaboration is still ambiguous. He is often seen speaking with Vincent and is working directly with him, often relying on him to put plans into motion or to tread where he cannot despite remaining in a position of indifferent superiority.

It is revealed that he assisted in awakening Thanatos in order to use his power to make the Other World, a place a step beyond life but before true death, where the souls of the deceased gather and can be resurrected. This plays into Heo's plans, though Margoras may just be interested in seizing Thanatos' powers and the title of Angel of Death, all the while gathering favor from those he helps.

He has some relation to Deathy and the Deadman Federation, possibly as their direct superiors.

He is voiced by Nobutoshi Canna in the Japanese version of the game. 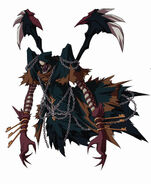 Banner image
Add a photo to this gallery

Retrieved from "https://rustyhearts.fandom.com/wiki/Margoras?oldid=18515"
Community content is available under CC-BY-SA unless otherwise noted.