Ian Jablonsky (이안 자블론스키 Ian Jabeullonseuki, イアン・シュヴァイツァ Ian Shyuvuaitsua) "The Supreme Shooter" (「覇弾の撃手」Ha-dan no gekishu) is a spymaster and one of the playable characters in Rusty Hearts. He is a gunner who makes use of traps and landmines and can either dual-wield two Revolvers, use a single Musket, or acquire a Weapon Bag depending on his weapon focus. Unoa is his skill master.

He is voiced by Norio Wakamoto in the Japanese version of the game.

Ian is the ninth and final character introduced to the game and is an Avatar for Natasha, so he utilizes the same weapons and skills as her. He has yet to appear in the story, but can be played from the beginning of the game.

Ian has swept-back dirty blonde hair, a notable cowlick, a thin mustache and goatee, and dark eyes; a scar runs from over his left eyebrow down to his cheek. In his default outfit, he wears a long, leopard-print coat with a large fur-trimmed collar and black accents; two ammo pouches are strapped to either side of his chest. Under this, he wears a grey and white striped dress jacket over a black dress vest unbuttoned at the top to reveal some of his chest and a simple cord necklace with a rectangular bauble. He keeps his matching striped pants up with a belt which sports a large gold buckle and a gun holster oriented to his right side which may indicate he is predominantly left-handed though this is not reflected in his one-handed use of the Musket and Weapon Bag so may not be deliberate. Completing the look, he wears dark brown Oxford shoes and black gloves.

Nadia's childhood friend and her secret agent. He survived the attack of monsters which killed all his other family members. He lived with Nadia's family when a noble visited Golden Seal Team adopted him, but his step parents were also killed by monsters. He organised mercenaries into a resistance to fight against monsters using his inherited wealth, but the organisation was disbanded due to betrayal of a member and now he works for Golden Seal Team to discover spies.

Korean and Japanese sources offer more in-depth character bios; Ian's age is given as 35 and his backstory contains a few more details, such as noting that much of Ian's life was motivated by revenge and seeking the power to enact it, and that it was Nadia who turned him from his bloody path. 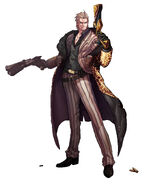 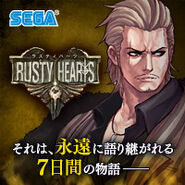 Retrieved from "https://rustyhearts.fandom.com/wiki/Ian_Jablonsky?oldid=18552"
Community content is available under CC-BY-SA unless otherwise noted.