He is voiced by Hikaru Midorikawa in the Japanese version of the game and Choi Seung-hun in the Korean version.

He holds a strong grudge against Lord Vlad, and doesn't get along well with Duke Gerald stating it's because he can't stand "incompetence" though Angela seems to think there's more to it than that.

Frantz has short black hair and grey eyes with cat-like pupils, likely due to his vampirism. In his default outfit, he wears a long, dark-grey coat with a high collar and red sleeve cuffs with frilled inner trim over black gloves; the cut of his coat is symmetrical and distinct, splitting off into three sections starting at both hips that are connected by four belts, two on each side. On his left arm, he wears a loose red armband (it has gold borders in some character portraits and his in-game model.) His sienna-colored shirt is as detailed as his coat with black patterning and more frilled trim, tied off with a light grey cravat. He wears his black pants tucked into knee-high, steel-toed boots that are tied with gold-colored laces. He carries his sheathed longsword in his off-hand as he has no sword belt.

"I can still taste your blood, warm and metallic...
I feel it in my veins, covering my heart in rust..."
— Frantz

A gloomy man from the start, Frantz Kruger's life took a turn for the worse when he was bitten by a vampire. Unable to resist the temptation, he bit just one person—his fiancée Amelia after she was involved in a tragic and life threatening accident. Frantz bit her only to save her life, but at the same time doomed her to the life of a vampire.

At the time of the incident. Frantz was only a half-human, half-vampire hybrid, and instead of letting the blood complete his transformation, Frantz sealed the blood inside of him and used the force of his own will to halt the process. He now exists as a creature trapped in limbo between human and monstrosity. As a side effect of his condition, he suffers from chronic anemia and insomnia, giving him an ashen appearance and a sullen, sarcastic disposition.

Soon after, Amelia mysteriously vanishes leaving Frantz behind. His only mission in life has been to return the blood that he took from his fiancée, and give her a chance to lead a human life once again-even if it means the end of his own.

Until now his efforts have been fruitless, but deep inside Castle Curtis, Frantz catches a glimpse of his long-lost fiancée and wonders if his search is finally over.

Korean and Japanese sources offer more in-depth character bios; Frantz's age is given as 27 and his backstory is significantly different and more detailed. His vampirism traces all the way back to his birth when his mother and father were attacked and killed by vampires; he survived and was born halfway between human and vampire. He met Amelia when he was 23; three days before their wedding, she suffered a head injury in a carriage accident and went into a coma. In an effort to save her, he awakened the vampiric power he'd suppressed his whole life and turned her; he didn't transition into a vampire completely however, because he had sealed Amelia's blood within his body in order to one day return it to her. His bio also notes he is afraid of being cut. 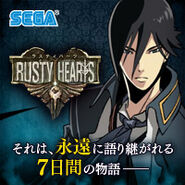 Frantz's portrait has changed from closed to open beta. It is now being used for character creation.

Retrieved from "https://rustyhearts.fandom.com/wiki/Frantz_Kruger?oldid=18437"
Community content is available under CC-BY-SA unless otherwise noted.