Edgar Grosvenor (에드거 그로스비너 Edeugeo Geuroseubineo, エドガー・グロヴナー Edogā Gurovunā) "The Child Sorcerer Without Limit" (「無極の魔導子」Mukyoku no madō-ko) is a witch and one of the playable characters in Rusty Hearts. He wields elemental and healing magic alongside a blade named Crudelitas (クルデリタス Kurederitasu) which begins as a Magic Sword, but can transform into a Scythe or Glaive depending on his weapon focus, similar to Graestra. Estel is his skill master.

He is voiced by Ai Nonaka in the Japanese version of the game.

Edgar is the seventh character introduced to the game and is an Avatar for Angela, so he utilizes the same weapons and skills as her, albeit with more speed. He has yet to appear in the story, but can be played from the beginning of the game.

Edgar has green eyes and short, sandy brown hair. In his default outfit, he wears a Tudor bonnet, and his main color scheme is blue and jade green with gold detailing. He wears a formal cropped shawl over a long-sleeved jacket with large cuffs tied off with a large white cravat. Completing the outfit, he wears green trunk hose over white cannions and ankle-high buckle shoes.

Don't be fooled by this boy's innocent appearance! Edgar is older and more skilled than he looks. After fusing with the demon blade, Crudelitas, he was cursed with the body of a child. Although he is a bit clumsy in his new body, his magical ability makes him a serious threat to Vlad's hordes. His reasons for enlisting are unknown, but his powers are so similar to Angela's that he may have crossed paths with her master, Rebecca.

Korean and Japanese sources offer more in-depth character bios; Edgar's age is given as 23 though he is physically 12. As was previously implied, it was Rebecca who helped him in learning how to control Crudelitas, though it seems he originally stole the weapon, his appearance a consequence of meddling with something he didn't understand. 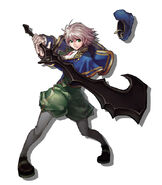 Edgar in his winter outfit 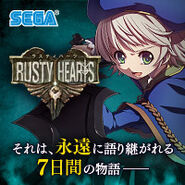 Retrieved from "https://rustyhearts.fandom.com/wiki/Edgar_Grosvenor?oldid=18424"
Community content is available under CC-BY-SA unless otherwise noted.